Welcome to SafariNow. Get off your accommodation booking by paying with the voucher code before .
South Africa/Western Cape/Cape Town/V & A Waterfront/Robben Island Museum and Nelson Mandela Gateway 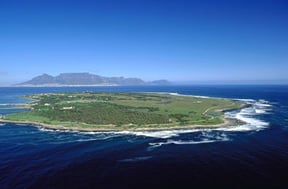 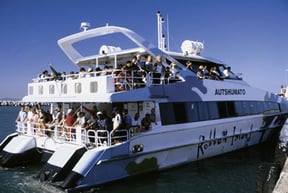 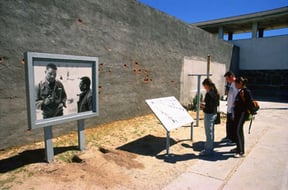 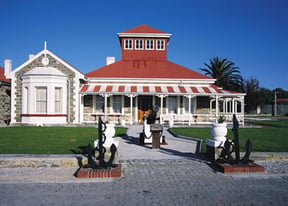 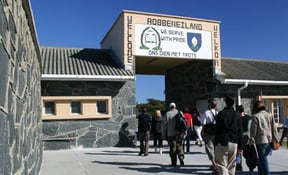 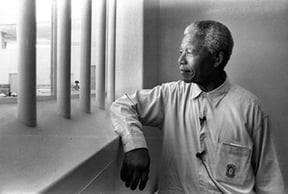 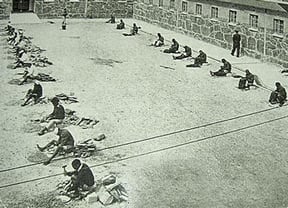 “Today when I look at Robben Island, I see it as a celebration of the struggle and a symbol of the finest qualities of the human spirit, rather than as a monument to the brutal tyranny and oppression of apartheid. It is true that Robben Island was once a place of darkness, but out of that darkness has come a wonderful brightness, a light so powerful that it could not be hidden behind prison walls… ' Nelson Mandela

This famous little windswept island has captured hearts and minds around the globe. Situated just a few kilometers from the glitzy Waterfront, it was “home” to Nelson Mandela for almost 20 years. The intention to silence anti-apartheid leaders by imprisoning them on Robben Island had the opposite effect. Instead, Robben Island came under the spotlight as a focal point for international resistance to the regime. Today it has become a symbol of freedom, the transformative power of forgiveness, and a place of political pilgrimage. The entire 6 square kilometer island is now a UN World Heritage Site.

In 1961 an austere maximum-security prison was built on Robben Island. It was here that Nelson Mandela was sent after receiving a life imprisonment sentence in 1963. Political and common-law prisoners were initially lodged together. Contact with the outside world was limited to receiving and sending two letters a year. Beatings, hard physical labour in the lime quarry, prolonged solitary confinement and insufficient food, bedding and clothing were endured for many years. Hunger strikes, legal action and international pressure eventually brought better conditions. The prison even became an informal university behind bars, with prisoners tutoring their warders. 1991 saw the release of the remaining political detainees and in 1996 the common-law prisoners were transferred to the mainland.

Daily tours depart by ferry from the Nelson Mandela Gateway at the Waterfront. The ferry trip takes 30 minutes to the tiny harbour. From there a bus ride takes one to historic places like the kramat, leper graveyard, a church designed by Sir Herbert Baker and the lime quarry where political prisoners endured lengthy hours of tough physical labour. Driving along the shipwreck strewn coast you can spot some antelope, plentiful seabirds and the lighthouse. The last stop is the maximum security prison.

The guides are former inmates and will take you along the Footsteps of Mandela tour in the notorious B-section. Mandela’s sparse cell is open, the others locked and empty. The A-section houses the Cell Stories exhibition, evoking the meagerness of prison life. Former prisoners have loaned personal items including an amazing saxophone that works, crafted from found bits and pieces. Have a look at the interesting Smuggled Camera Exhibition in the communal cells. Prisoners managed to slip cameras onto the island in the late 1980s. The enlarged photos are heart warming, giving an indication of their solidarity, friendship and expectancy that it would soon be over. The entire trip lasts three and a half hours and costs around R150.

★★★★★ 5 Reviews
Sleeps 80 in 20 rooms
V & A Waterfront Self-catering
Mountain Marina is a collection of one, two and three-bedroom apartments, designed to provide the ultimate luxury and spacious comfort for...
R2150
Avg per night
View Deal

★★★★★ 5 Reviews
Sleeps 2 in 1 room
V & A Waterfront Self-catering
This beautifully furnished, luxurious apartment is situated in the prestigious and popular V & A...
R3500
Avg per night
View Deal

Sleeps 202 in 101 rooms
V & A Waterfront Hotel
The Portswood Hotel is situated in the V&A Waterfront in Cape Town. It is just over 20 kilometres from the Cape Town International Airport...
R3213
Avg per night for 2 guests
View Deal

Sleeps 6 in 3 rooms
V & A Waterfront Self-catering
Waterfront Village, situated on the water’s edge in the picturesque V&A Waterfront Marina, next to...
R6450
Avg per night
View Deal

Sleeps 2 in 1 room
V & A Waterfront Self-catering
103 Parregon is a gorgeous one-bedroom apartment with an open-plan kitchen and a large terrace with views of the marina and the yachts....
R2760
Avg per night
View Deal
See all accommodation near V & A Waterfront Click to display the map
Robben Island Museum and Nelson Mandela Gateway is 0.1km from the centre of V & A Waterfront , the nearest airport 20.7km (Cape Town International Airport).
*Distances are shown as the crow flies and not necessarily the actual travelling

Other things to do near V & A Waterfront

Bar or Nightclub in Western Cape
Proud of it's Argentinian influences, Chakkachurri Bar offers an exceptional venue for a night...

Popular Attraction in Western Cape
Come and enjoy the thrilling experience of real-time combat with G-Force Paintball, perfect for...

Wine Estate in Somerset West
Ridgemor wines dates back to 1670 and is considered one of the oldest wine farms in the area....
See all things to do near V & A Waterfront
WEB01